Brothers and sisters in Christ, grace and peace to you from God our Father and our Savior and Lord, Jesus the Christ. Amen.

I returned just a few days ago from a time of vacation – or rather staycation I should say. It was good.

I had planned to do a lot of things. Nearly every one of my well thought out and well-intentioned plans for this staycation did not actually get done. I guess, once I entered into this time of rest, my body and the Holy Spirit had other plans for this time. It reminded me once again how important regular, intentional times of rest are for one’s body and soul.

Hopefully, I’ll keep that in mind in the coming days and won’t be quite as worn out at the beginning of my next staycation.

In our gospel reading today, the disciples discover that they are not the only ones doing the work of Jesus in the world. By the time the disciples discover this, the good news of Jesus had already extended far beyond the things that only 12 disciples were capable of doing. And they are upset about that. They tell Jesus that they tried to stop him because he’s not part of our group. Jesus doesn’t seem to share their disgust or to be too worried about this outsider’s work on Jesus’ behalf.

During my recent staycation, Jesus’ work through Good Shepherd continued in miraculous and amazing ways. This was another reminder for me that this work – God’s work through our congregation – is not only dependent upon me as the Senior Pastor. Or on any one person for that matter. I’ll be brutally honest, sometimes my ego has a problem with that. Jesus doesn’t seem to share that same problem that I have. A problem I have way more often than I care to actually admit.

So, rather than preaching about cutting off our limbs or plucking our eyes out, I felt the Holy Spirit calling me to focus a little attention on Jesus’ exchange with the disciples that led him into these shocking statements about losing body parts in the first place. Losing body parts to describe what should happen when people get in the way of God’s work unfolding in the world through other people.

I’m not all that concerned about losing an eyeball or a leg. As someone who claims to be a follower of Jesus, I’m far more concerned with the ways my own ministry and leadership as a pastor get in the way of God’s work happening through people like those I’ve met recently.

During my staycation, I think learned something new about myself and my faith journey. Things that I hadn’t considered much before I began these few days away from my official duties as a pastor. I discovered once again, that God’s work in the world is not dependent only on me. There are nearly 4,000 brothers and sisters in Christ who are part of Good Shepherd Lutheran Church casting out demons and providing healing to hurting souls and doing miraculous acts of service in the name of Christ every single day.

In the past week or so, I was able to step away from the intensity of my daily work as a pastor and see that maybe I’m the one needing to receive a cup of water once in a while. Maybe I’m not the only one who is able to give someone else a cup of water.

In more ways, than I can begin to share with you today, I’ve been blessed to receive a cup of water from brothers and sisters. 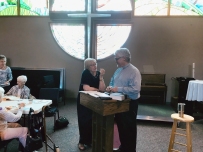 I’ve received a cup of water from brothers and sisters who are part of our community of faith at Good Shepherd. A congregation who allows their pastors and staff time away for staycations and rest once in a while.

I’ve received a cup of water from brothers and sisters who are not part of our community of faith, yet warmly welcomed a stranger like me into their worship and fellowship.

I’ve received a cup of water from brothers and sisters who don’t believe in God and in a relationship with Jesus in the same way I do. Yet in spite of our theological and biblical interpretation differences, we share a common belief in the good of all humanity in God’s good creation.

The good of God’s creation even though wars rage on endlessly as we long for peace.

The good of God’s creation even though disagreements and death seem more important to us than respect and life.

Photo by Designecologist on Pexels.com

The good of God’s creation even as we live in a time and place that is consumed by a seemingly endless barrage of political and personal and professional attacks and rhetoric that seek to destroy the very fabric of all God has created and is creating.

I’ve even received a cup of water from brothers and sisters, who frankly, I’m not sure if they are followers of Jesus at all. But I was blessed by them. I was blessed by them as they cast out demons I was holding on to, provided healing to things that were causing me pain, and quenched thirst deep down in my soul that freed me to live more fully into a much needed time of rest.

Jesus said to his disciples some 2,000 years ago and to his disciples gathered together in worship today, “Truly I tell you, whoever gives you a cup of water to drink because you bear the name of Christ will by no means lose the reward.”

Brothers and sisters in Christ, as children of God, who began bearing the name of Christ in the sacred words and holy waters of the Sacrament of Holy Baptism, when have you not only given a cup of water to someone but received a cup of water from someone. Maybe even from someone whom you’ve attempted to stop while they were simply trying to do God’s work.

What if this is how our conversation with Jesus might take place today, instead of the way it happens in our gospel story today. What if this is what the disciples of today say to Jesus, 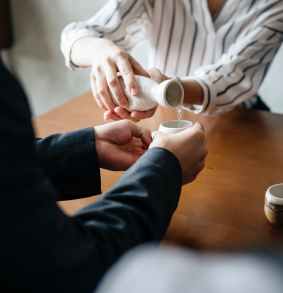 Photo by rawpixel.com on Pexels.com

“We saw some people, Lord, who were casting out demons, working for justice, advocating for those who have lost their job and feel left behind, caring for veterans and single mothers, volunteering to feed the hungry and give money to those in need without anyone guilting them into doing so, and so much more, Lord, all in your name. They do not follow us, Lord. In fact, we really disagree with them on a lot of things. But we did not try to stop them, and they gave us a cup of cold water. And that was pretty cool.” [I give thanks for Pastor David Lose’s inspiration for this thought at http://www.inthemeantime.com]

Brothers and sisters in Christ, as you live out your faith in your work and your play this week, how are you receiving a cup of water from someone else. Take a minute to give God thanks when those holy moments happen. Amen.

I like to think of myself as a pretty easy going person who seeks to daily discover anew how God is present in my life and in the world in which I live and serve. I am a husband, father, brother, son, friend, pastor, and maybe most significantly – a child of God! My beautiful spouse Wendy and I live in Bismarck, ND with our twin daughters, Ilia and Taegan and our crazy dogs Henri & Sadie. I’ve serve on the staff of Good Shepherd Lutheran Church in Bismarck, ND since July 2001. I was first called to serve as Music & Worship Minister, in 2010 was called to serve as Pastor of Worship and Youth Education, and in January 2014 was called to serve as Senior Pastor. My professional background is a diverse collection of musical and educational experiences that ranges from live concert production and promotion to recording studios, and live performance to music education. Prior to joining Good Shepherd, I was an Instructor of Music at Bismarck State College and owned and operated a successful teaching studio called 6x6 Guitar Studio. I am a graduate of the University of Mary in Bismarck and Pacific Lutheran Theological Seminary in Berkeley, CA and was ordained to the Ministry of Word and Sacrament in the Evangelical Lutheran Church in America in September 2010. Outside of Good Shepherd, I enjoy hanging out with my family and friends, reading, listening or playing any and all music, a relaxing round of golf, or spending some quiet time with God. END_OF_DOCUMENT_TOKEN_TO_BE_REPLACED
This entry was posted on Friday, October 5th, 2018 at 1:57 am and posted in Recent Sermons. You can follow any responses to this entry through the RSS 2.0 feed.
« “Ephphatha” 09.09.2018 Sermon
Stuff & Humility 10.14.2018 Sermon »